Smallmouth Bass are a “Big Deal” in the recreational angling industry. Big enough that for more than the last 200 years, anglers have been pursuing them using varied techniques all across the United States as impacts to their native range increase. Like cold water species, demands on Smallmouth habitat and conservation are issues that anglers and fishing guides are paying big attention to. Once an Upper Midwest species that thrived in specific watersheds, you can find Smallmouth and anglers chasing them in places like California, Texas, Washington and referred to by many names – bronzeback, brown bass, brownie, smallie, bronze bass, and bareback bass. 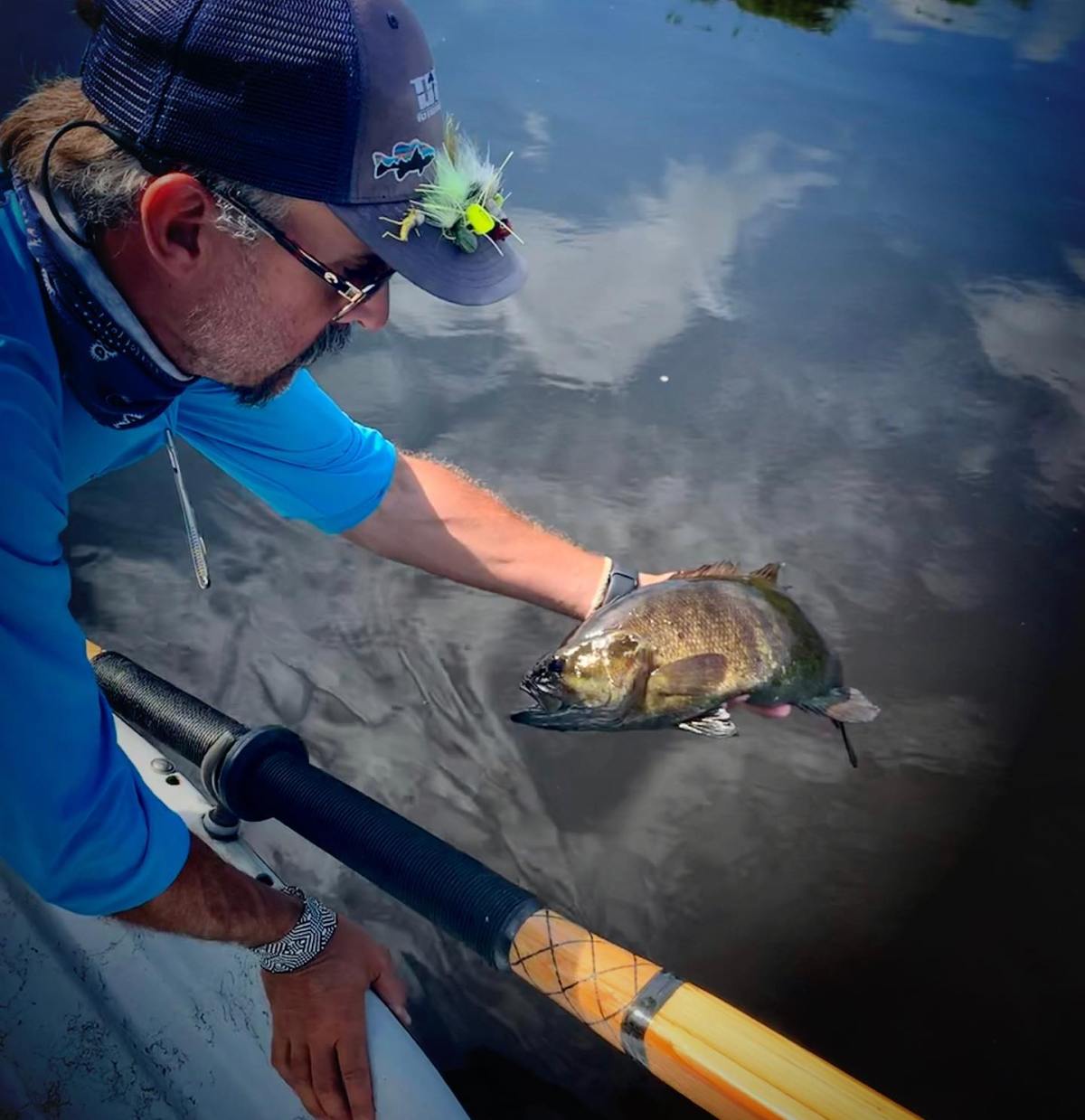 There are a fair number of well-known guides that pursue these fish with great interest, including Team Sawyer Ambassador Tim Landwehr at Tight Lines Fishing Company in Wisconsin. Guides like Tim and others in the Midwest have written books about Smallmouth, including “Smallmouth: Modern Methods, Tactics and Techniques” chronicling their passion. So, with the attention being paid to this species, anglers have followed a familiar model for protecting them, and raising awareness to ensure a future for their fisheries and the natural world.

One of the groups working to protect these fish is led by Mike Simon, Founding Member of the Wisconsin Smallmouth Alliance. “We’re very excited about partnering with Sawyer Paddles & Oars. Funding for our projects is so important, and an opportunity like this doesn’t come around very often.” Mike says that the need and requests for conservation work grow each year. “This year’s projects include working with other organizations to continue supporting children’s programs. We are working with the newly forming Northern Wisconsin Smallmouth Alliance. We are helping to fund access to the Couderay River and to get special regs on the St. Croix and Namekogan Rivers (part of the National Scenic Riverways). We have also received a request to fund stocking of smallmouth bass in Little Falls Lake in the Willow River State Park. We’ve recently purchased new aluminum signs that will continue our program of posting “Free the Fighter” signs at landings around the state.”

There are groups of anglers following the example of Wisconsin, with members in Illinois, Minnesota, and Michigan, where Mike Schultz of Schultz Outfitters guides clients and operates a fly shop. Mike and his team offer guided trips on six rivers in Southern Michigan and in exotic locations, but his “local” water, the Huron River, is the river his shop is on and is truly a gem of a Smallmouth stream. Flowing 125 miles from its origin in Oakland County, to the mouth at Lake Erie, the Huron is a varied and productive fishery. Schultz Outfitters is the only full time fly fishing guide service working the entire Huron River watershed. One of his signature fly patterns, the Swinging D, is a six-inch long foam head baitfish imitation that mimics a wounded meal for a hungry Smallmouth. I’ve got a few in my streamer box, and their massive profile is intimidating, but appealing to anglers too.

So, why is a 53-year old paddle and oar company based in Oregon excited about a Midwest fish found in warm water? Well, for one, our founder Ralph Sawyer is a Michigander (so is the author) who made his name as a canoe racer on the Au Sable, the same places where anglers and guides like Tim and Mike have made their careers. And, we care about conservation; not just cold water species, but fish that our customers and Ambassadors advocate for. When I visited Tim and his crew at their shop and “guide house” in Wisconsin last summer, I found guides just as passionate and “real” as anywhere. Same boats, same stories, same Ping Pong table (ahem, we did beat the guys from SCOTF at a match) in a well-worn garage complete with grill, supplies, and fly-making materials scattered about.

Among our lively discussions was creating a new Artisan Series SquareTop Oar featuring a well known warm-water species artist named Matt Stockton. Matt’s work has been featured on Simms products, fly shops, lodges, and stickers on probably most of Michigan’s guide boats. Like our Artisan Series artists, Matt is an angler who expresses his passion for fishing and conservation visually, and his work is striking and expressive. When I reached out to him for a partnership, he had already heard that Sawyer was interested and we progressed quickly in the design and production process. In March, Tim and Mike will launch his signature Smallmouth Oar at two of the biggest fly fishing shows in the country, the MidWest Fly Fishing Show and the Great Waters Fly Expo.

Their shops will be the exclusive source for pre-ordering until March 23rd, when this model will be available at Sawyer Station and at select Authorized Dealers across the country. Proceeds from the sales of this oar will benefit the conservation projects and work done by the Smallmouth Alliance groups across the country. We at Sawyer Paddles and Oars are excited to partner with passionate anglers, artists, and conservation groups working to protect places and species they care about. Through our collaborations, financial support is provided to fund their programs and goals. Join us in celebrating their work and “functional art” with the Artisan Series SquareTop Oar!

There’s a reason why specialty paddling shops thrive, where great customer service, product knowledge, up to date river conditions and special events make them a valued resource in the community. When you step into a great shop, you’ll find staff that have experience using the products they sell, continually have in stock, and likely used on the water recently. Makes sense, right? We believe that specialty retail shops are integral to our success, and yours on the water.

Meet Mike Donovan, Owner & Founder of Sunshine Sports in Billings, MT. Mike’s rafting career started many years ago, at 10 years old when he and two brothers won a raft in a local contest, and the rest is history.

“I have rowed countless days with all the best selling brands of oars and at this point in the journey, I now row with the Sawyer SquareTop Dyno-X Shoal Cut oars. “I believe the innovation and performance of a Sawyer oar cannot be matched by any of the competing oar brands. Sawyer offers the greatest depth of oar models each offering different performance characteristics.” So we asked Mike how Sunshine staff makes the customer experience stand out.

“We use an interactive demonstration comparing the varying flex and whip of different shafts and blades really drives home the differences, and helps a customer choose between the many models.” At Sawyer, we call this “the unduplicated feel and progressive flex that only a tapered wood shaft delivers.” The added strength of a carbon fiber braid wrap and the over-sized “SquareTop” from the handle to the rope wrap provides a counter balanced feel without compromising flotation. Yes, a counter balanced oar that floats… flat on the water!

Mike stressed that his staff are pro’s at explaining the benefit of the comfort and forgiveness of rowing an oar with more uniform flex, and how a more balanced oar can reduce the fatigue of lifting an unbalanced oar 1000’s of times per day. That’s music to his customer’s ears, and we agree. Until next time, Eddy Out!

Behind every guide trip is the preparation, planning, and partnerships that make it all work.

END_OF_DOCUMENT_TOKEN_TO_BE_REPLACED

A young man from east of the Mississippi, the largest river in the United States, travels west to experience the Wild & Scenic Rogue River in Oregon.

END_OF_DOCUMENT_TOKEN_TO_BE_REPLACED 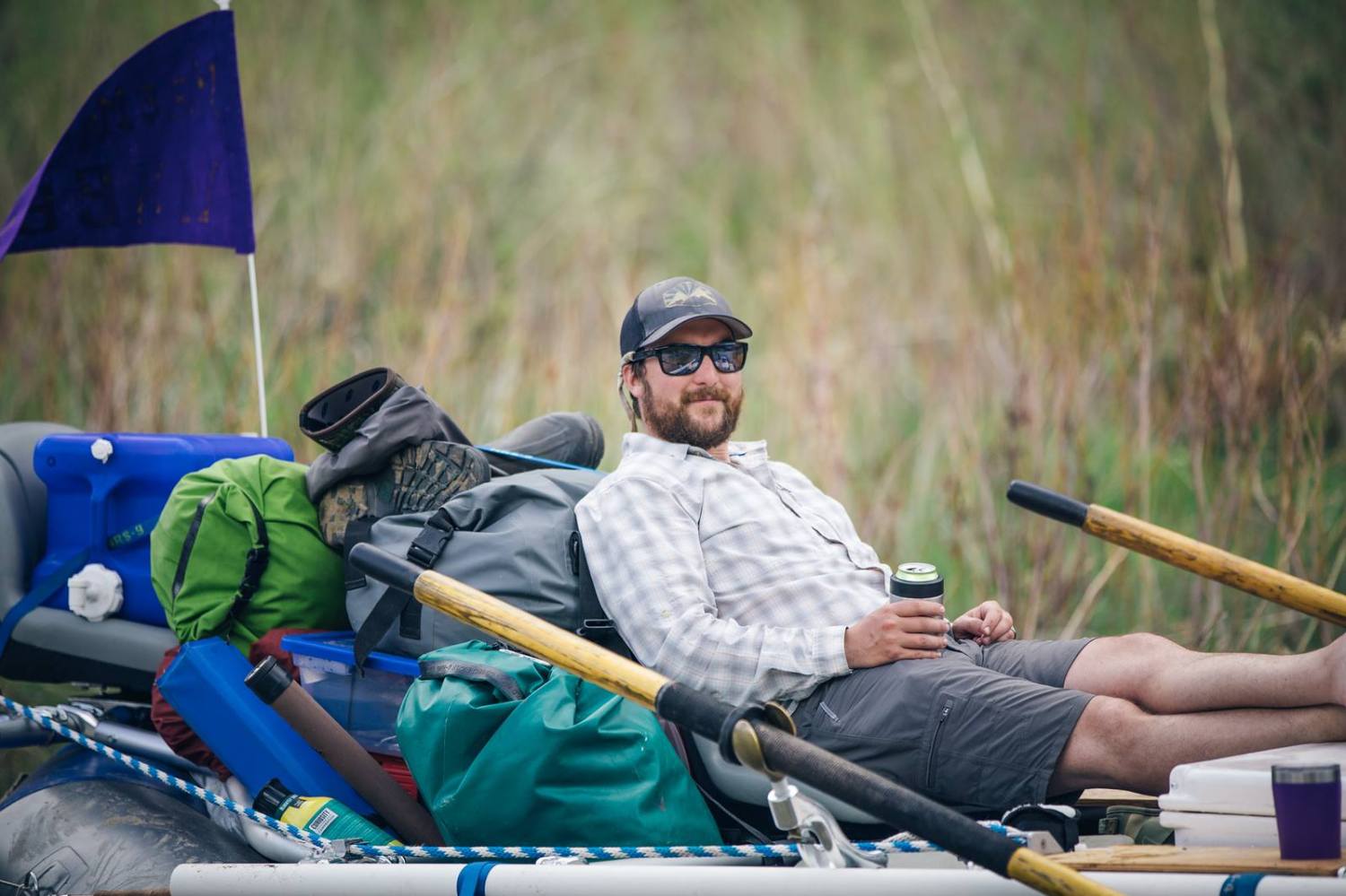 It’s common to find professionals in the outdoor industry at the forefront of design and performance, leading the use of new technologies and materials and adapting their tools to the job at hand. Sawyer is no different, and continuous feedback from professional guides, outfitters, and athletes drives our innovation. With a racing history (see Part 1 in the series) that influenced design, handcrafting wood oars out of raw materials like Ash, Cedar, and Douglas Fir, and composite oars and blades (fiberglass and carbon fiber) for fishing guides and anglers took a different approach to the centuries old task; controlling a boat on a body of water safely, and back home again. Today, an oarsman might make 1000 oar strokes per mile. After 10 years of guiding anglers myself, and with many sets of oars, today’s Sawyer lightweight and high-performance products are perfect for professionals and recreational users.

When we design oars and oar blades for anglers, the end result isn’t always a finished product that fits the traditional profile. As you read before, the Shoal Cut blade was designed with shallow-water applications in mind. I liken it to the differences between a spoon and a knife. Buttering a slice of warm sourdough right of the toaster? A knife with a long, thin blade for an even application. A bowl of oatmeal for breakfast along with it? A spoon, of course (yes, we’ll even talk about the beloved Spork in future posts!).

Brian Wheeler, a professional fly fishing guide in Montana, has two sets of Sawyer oars for different boats and purposes. At around 80 days a season guiding and another 40 or so floating with his wife and their dogs, they spend most of their time on the Big Hole, Beaverhead, Madison, and Smith rivers. Here’s his take.

“In my 13’ Aire Tributary I row the classic Smoker DyneLite in a 9’ length with the narrow blade and have abused these oars for the past 7 years. I am in love with them. The lightweight, smooth flexing construction with the bomb-proof blade are simply perfect. I personally love both the flex and pop you get from wood. In fast-paced pocket water, you have to be able to dip in behind and around rocks to make corrective and speed-stabilizing micro-strokes. It’s simply second nature with these oars. The “pop” of wood allows for maximum efficiency of your stroke in those tight spots where trout live, if your anglers can hit the spots!”

“In my Clackacraft Eddy, I upped the size of my oars to using 9’3” SquareTop Dyno X, also with the narrow blade. The Eddy is a wide boat. Adding 3” to each oar, though adding some weight, was definitely a benefit. My hands stay closer and my rowing stroke stays in the power zone, instead of reaching farther apart and putting stress on my already stressed out shoulders. Though 9.5 footers would be great as well, for me, the 9’3” is the perfect balance of extra length, swing-weight, and functionality. The Dyno X wrap stiffens up the wood oar to a noticeable degree, though it still beats the complete lack of feel in fully composite oars. The stiffer flex helps me get moving when the water gets pushy.”

Brian is clearly a toast-is-best-buttered kind of guide. Until next time, when we’ll hear from a member of our speciality shop team, on why they choose Sawyer for their customers. Eddy Out!